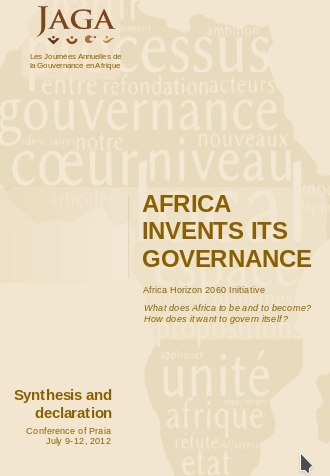 Governance is the art of a society inventing and implementing a way of managing itself so as to guarantee cohesion and well-being within its borders, security with respect to the outside world and equilibrium between itself and its environment.

Up until now, Africa has simply reproduced, at the time of independence, the model of colonial States. It has followed outside recommendations and submitted to outside injunctions, which have changed frequently according to fashion or the demands of ‘guardian’ powers or international institutions. Its so-called ‘modern’ institutions, often juxtaposed on traditional management modes that are alive and well–are still like a superficial blanket weighing on societies.

The goal is certainly not to idealise the past and claim, in the area of governance, an ‘African exception’ to justify dictatorships, nepotism, clanism or a lack of regard for human rights. But now it is up to Africa to find its own path forward by taking the best of its traditions—re-examined in the light of 21st century challenges—and the best of international experience, freely interpreted by Africa itself and not imposed on the continent in the form of standards and conditions.